West Venice Avenue: The Heart of the City 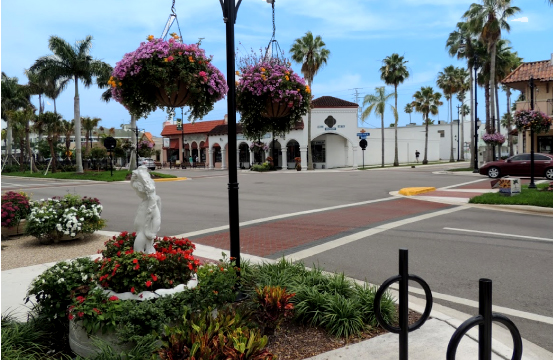 West Venice Avenue, the gateway to the Gulf, captivates visitors and residents with its tropical beauty. Stunning palm trees tower over the avenue, while hibiscus, jatropha, jasmine, and many other flowering plants and hanging floral baskets provide endless color along the street. And an abundance of shade trees and benches along the sidewalks create an inviting environment for shopping, dinning, and admiring the scenery.

Did you know?
West Venice avenue is home to:

• Wonderful parks and green spaces. Centennial Park, with its gazebo and interactive Children’s Fountain, is the center of community events and activities throughout the year. Heritage Park, located in the median along West Venice Avenue from Avenue des Parques to the beach, provides a lovely, peaceful place to stroll. Its lighted banyan trees, historical displays, and memorial to veterans of all service branches make it extra special. Within the City Hall building, there also are two atriums filled with greenery and orchids.

• Public art. Sculptures are sprinkled along the avenue in unexpected places. Watching over the southern corners of Venice Avenue and Nokomis Avenue are two bronze statues—Maria and Sophia. Further down the avenue on the side of the Green Parrot Building is a mural, Healing in the Enchanted Garden, showcasing in wonderful detail area wildlife. The mural accents the lovely walkway from Venice Avenue to Miami Avenue—Founders’ Way which pays tribute to the founders of Venice Hospital. Just west of downtown, the ‘Four Seasons’ statues can be viewed along Venice Avenue. To explore the work of local artists, be sure to check out Tangi & Jess and Venice Island Gallery & Gifts.

• Thirteen historical buildings, including the Schoolcraft Building, the Boussevain Building, the Sarasota Bronx Building, the Nickell Building, Ennes Arcade, the Sanders Building, the Blackburn Building, the Estes Building, the Mohler Building, and the nearby Lord-Higel House. To learn more, pick up a Venice Walking Tour map at Venice MainStreet, 101 West Venice Avenue, Suite 23 or at the information kiosk in Centennial Park. The map also can be viewed online at visitvenicefl.org/historic-walking-tour/.

• More than a dozen dining options. Your tastebuds will delight in all the choices from Italian and Irish cuisine to pub and American fare. And for dessert or a special treat, try a baked-fresh daily French pastry at Croissant & Co.; a scone with Devonshire cream at Upper Crust Cafe and Bakery; a scoop of ice cream at the Venice Avenue Creamery; a cup of gelato at Ciao Gelato; or a quality confection at Kilwins Chocolates of Venice.

• Numerous options if you want to make downtown Venice your home or just visit. You can be steps away from dining and shopping on West Venice Avenue by living in an apartment unit downtown. Residential units are located on the second floor of several historic buildings. To check for availability CLICK HERE. Casa de Sunbug Apartment is a unique, upscale, large apartment with everything at your fingertips. Imagine breakfast at a charming sidewalk cafe, walk on the beach, shelling, tennis, afternoon coffee, glass of wine, dinner, theater tickets– all within walking distance. The apartment is located above the SunBug boutique. You will love this vacation rental apartment’s convenient, heart-of-downtown location!

Bringing Life to John Nolen’s Vision
From the start, city planner John Nolen pictured a walkable, human-scaled small city, with distinct neighborhoods all within strolling distance of a few-blocks-long shopping district along Venice Avenue. The key feature of the Venice plan designated Venice Avenue as a 200-foot boulevard with a 100-foot parkway in the center terminating in a plaza on the beach.

The western portion of this landscaped boulevard is a promenade with a Gulf vista. The boulevard is 120 feet wide in the business section and 200 feet wide in the residential section. From Harbor Drive to Tamiami Trail is the heart of the central business district. The western portion of Venice Avenue with its oak canopy is primarily residential, and includes three Northern Italian-style mansions (at 605, 613, and 625 Venice Avenue West) built in 1926 to house executives of the Brotherhood of Locomotive Engineers. Commercial properties also adhered to the design controls to maintain the Northern Italian architectural style and to preserve the visual character of the city.

• The Schoolcraft Building (201 West Venice Avenue), built in 1926, had shops on the first floor and apartments on the second. The first floor housed the local telephone switchboard and the Venice Pharmacy. Its exterior is essentially unchanged from its 1926 appearance.

• The Boussevain Building (205 West Venice Avenue) was the first commercial building constructed in Venice. Built in 1926 using clay block and brick with steel reinforcements, it housed two retail stores on the first floor and several offices on the second floor. The original retail stores were the Dawson Furniture Company and the Venice Hardware Company. Venice’s first newspaper, the Venice News, had an office on the second floor.

• The Sarasota Bronx Building (213, 215, 217 West Venice Avenue) was originally the location of the Shaw Dry Goods Store. Before construction of St. Mark’s Episcopal Church in 1939, it housed the Episcopal mission. Later, it was used for a library, dry cleaner, and a hardware store. By 1970, the upper section of the story-and-a-half arched windows were enclosed and a covered walkway was installed.

• The Nickell Building (219-221 West Venice Avenue) was first home to Blate’s of Venice Wearing Apparel with two stores on the main floor and four apartments on the second. Later, it housed Rice’s Nestlewood Shop.

• The Sanders Building (247-251 West Venice Avenue), with its original Venetian design, was the second commercial building constructed in Venice. It was originally intended to house a drug store, barber shop, and haberdashery. One of its first tenants was the Rendezvous Tea Shop.

• The Blackburn Building (303-305 West Venice Avenue), built in 1926, was designed to house five stores on the ground floor and eight apartments on the second floor. One of the original tenants was a dentist, Dr. George Wheeler.

• The Estes Building (307 West Venice Avenue) first housed Venice Stationery, a men’s clothing shop, and a law firm. During the 1940s, it was home to the Venice Gondolier and a radio and television store with a TV in the window for public viewing.

• The Mohler Building (311 West Venice Avenue), built in the Northern Italian style, first housed a furniture store and a hardware company. Rental apartments were located on the second floor. Later this building housed the Venice Electric Supply Company and the Venice Tile Company.

• The Lord-Higel House, located at 409 Granada Avenue behind Venice City Hall (401 W. Venice Avenue), is the oldest structure in South Sarasota County. Real estate attorney Joseph H. Lord originally built the two-story house in 1896 on 90 acres near Roberts Bay, where he grew citrus. In the early 1900s, citrus grove manager George Higel and his family lived in the house. Acquired by the City of Venice in 2005, the house was moved to its current site and is in the process of being restored. When completed, the first floor of the house will serve as an early settler museum. But even though visitors can’t go inside it yet, the Queen Anne–style home with its wraparound porch still helps paint a picture of what life was like in Venice more than a century ago.