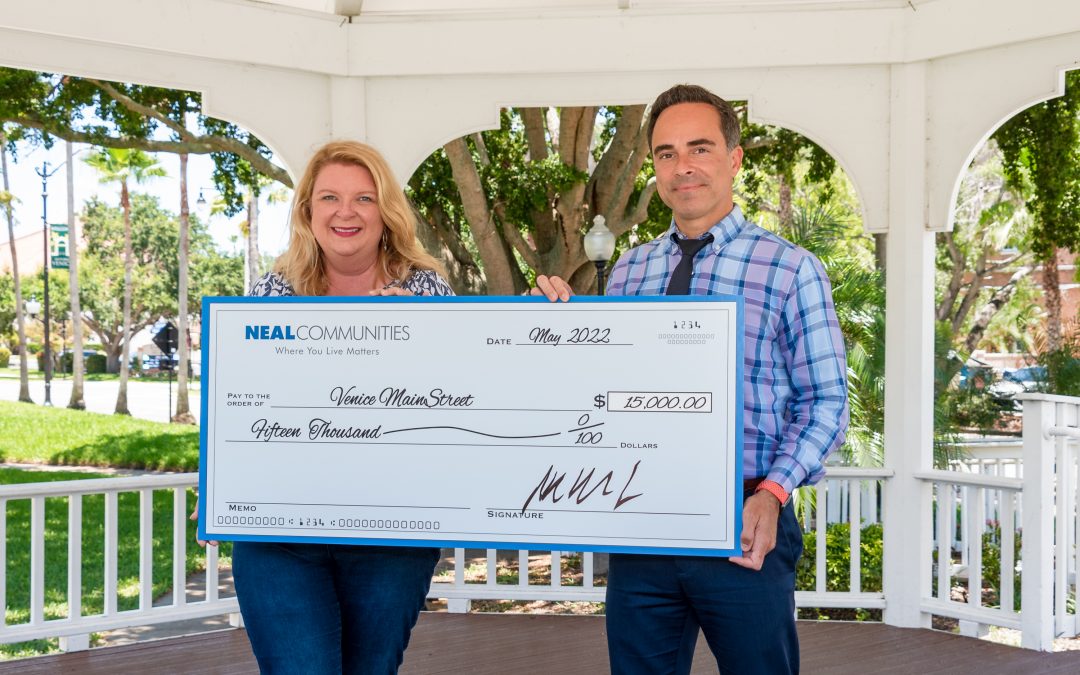 Photo: Kara Morgan (above left), CEO of Venice MainStreet, accepts a check for $15,000 from Neal Communities, which was presented by Carlos Puente (above right), Vice President of Sales and Marketing, at the gazebo in Centennial Park in downtown Venice.

Neal Communities donated $15,000 to Venice MainStreet to sponsor its Friday night concert series and marketing efforts. It is the first annual sponsor for this popular entertainment series in downtown Venice.

For 35 years, Venice MainStreet has supported the city of Venice’s historic downtown district by hosting special events like the Friday night concert series. On the second and fourth Fridays of each month, free music performances take place from 7 p.m. to 9 p.m. in Centennial Park. The series, which is open to the public, has an annual average attendance of 10,000. It helps attract both tourists and residents downtown and stimulates economic spending in dining, shopping and recreational activities.

“Venice MainStreet is grateful to Neal Communities for supporting our mission through sponsorship of our annual concerts in the park series. The funds will be used to pay local artists to perform and support marketing efforts for downtown” said Kara Morgan, CEO of Venice MainStreet. “We look forward to an exciting roster of performers throughout the summer months and we hope everyone will try to catch a concert downtown this year!”

Venice MainStreet is an accredited Main Street organization through the Florida Main Street Program and Main Street America. Its mission is to preserve and enhance the character, beauty and economic vitality of historic downtown Venice. The organization achieves its goals through marketing, promotions, special events and historic preservation advocacy.

“We are proud to support an organization dedicated to economic development and business vitality in the Venice community,” said Pat Neal, founder and chairman of Neal Communities.

About Neal Communities
Neal Communities, based in Lakewood Ranch, Florida, is Southwest Florida’s largest and most established locally owned and operated private builder. During the company’s 50-year history, it has built over 18,000 new homes in more than 90 acclaimed communities from Tampa to Naples. The company consistently ranks among the nation’s top 100 home builders and has earned numerous awards including the prestigious Builder of the Year from Professional Builder in 2015 and America’s Best Builder in 2012 from BUILDER Magazine. With a core belief that “Where You Live Matters,” Neal Communities has given more than $7.5 million to local charities throughout Southwest Florida and is committed to the communities where they live, work and build. Company sales in fiscal year 2019 were $410 million.