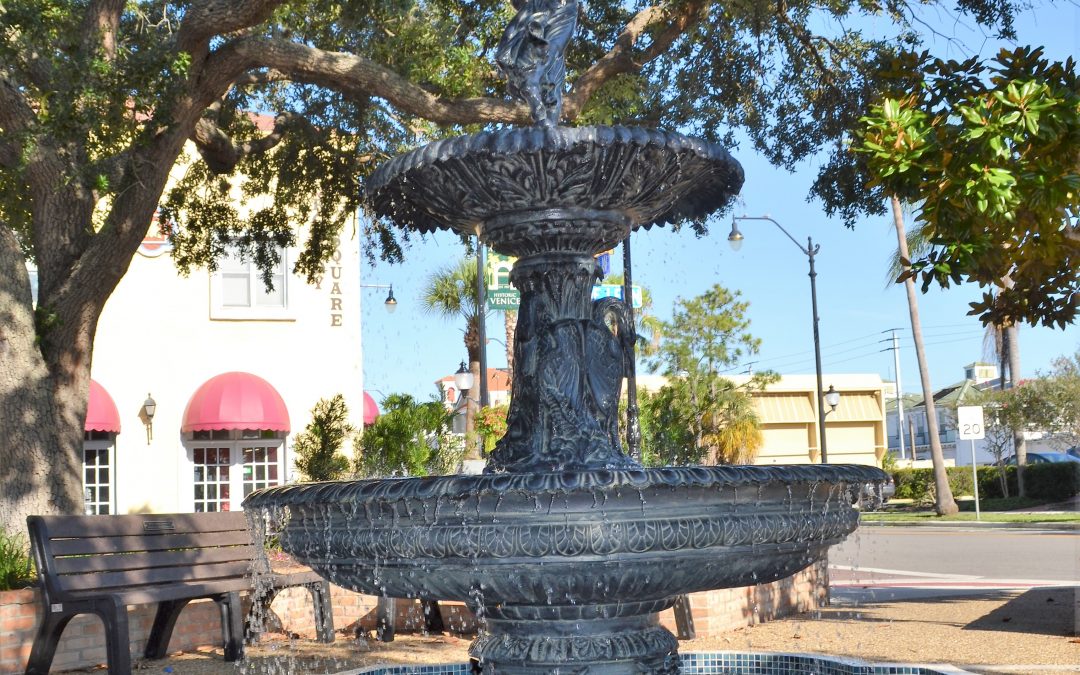 Nokomis Avenue, Nassau Street, and Harbor Drive provide much more than connection to downtown Venice. They also bring their own special charm to the city with numerous parks and green spaces, beautiful murals and artwork, historical buildings, and a variety of shops.

Did you know? The area is home to:

• Nearly a half dozen parks and green spaces.
– Fountain Park along Nokomis Avenue provides a peaceful and serene setting for pedestrians. The park encircles a beautiful fountain adorned with an original art piece, along with color changing lights in the fountain bowl.
– Ponce De Leon Park, a triangular parcel along Nassau Street, provides a peaceful landscaped setting with a statue.
– Monty Andrews Arboretum at West Blalock Park is an environmental and educational gem. The arboretum holds over 80 species of trees and palms identified with information signs. There also is a Florida-friendly shrub area, butterfly garden, picnic areas, and four life-size animal sculptures of a Florida panther, sea turtle, manatee, and tarpon.
– Venezia Park, just south of the arboretum on Nassau Street, is the center of a historical subdivision. It is landscaped with tall, native long-leaf pines, providing shady walkways and a gathering place for the community. It also has three Venetian Lion statues.
– Hecksher Park, along Harbor Drive, caters to the sports enthusiasts with its tennis, pickleball, basketball, shuffleboard, and racquetball courts.
– Harbor Drive also is the gateway to Venice’s southern parks and beaches.

• Two beautiful murals and three art galleries. The murals are located along Nassau Street—a coral reef-themed one near the Children’s Fountain in Centennial Park and an interactive one showcasing the spirit of Venice along the wall of Celebration Corner. Collectors Gallery and Framery, Piece By Piece Art Studio, and the Venice Art Center are just three of the galleries in the city’s growing art district, exposing visitors to the vast trove of creatives in South Florida.

A Closer Look at Its Historical Buildings

The historical buildings along Nokomis Avenue, Nassau Street, and Harbor Drive illustrate well the style of architecture that city planner John Nolen envisioned for Venice in the 1920s. A number of them also are listed in the US National Register of Historic Places.

• The opening of Hotel Venice (200 N. Nassau Street) in 1926 was an important milestone in turning city planner John Nolen’s vision for Venice into a reality. The main entrance with its welcoming courtyard was built facing west and Nassau Street, which was the first street built in Venice. The courtyard was lined with orange trees which were illuminated with small orange globes woven throughout the branches. From 1933 to 1970 it became part of the campus of the Kentucky Military Institute, which spent its winter sessions in Venice. Today, the building serves as a retirement community, and the spacious lobby and dining room are still furnished with the original inlaid cypress beamed ceilings and terrazzo floors.

• The Sawyer Building (south Nassau Street) was constructed in 1926 by Harold W. Sawyer to house his grocery and meat market on the ground floor along with eight offices on the second floor. In 1934, the building was purchased by the First Baptist Church and is still used by the church today.

• The Blalock House (241 S. Harbor Drive), added to the US National Register of Historic Places in 1989, is a two-story Mediterranean Revival style residence constructed of rough cast stucco over a woodframe.

• The Triangle Inn (351 S. Nassau Street), featuring a castle-like turret, was constructed in 1927 as a two-story rooming house. After changing hands over the years, the building was acquired by the City of Venice in 1991. The City built a new foundation, moved the building from its original location in the 200 block, and restored the exterior to its 1920s appearance. In 1996, it was entered into the National Register of Historic Places. Today, it is home to the Venice Museum and Archives, which holds a collection of more than 30,000 pieces of historical material relating to Venice, Nokomis, Laurel, and Osprey.

To learn more, pick up a Venice Walking Tour map at Venice MainStreet, 101 West Venice Avenue, Suite 23 or at the information kiosk in Centennial Park. The map also can viewed online at visitvenicefl.org.