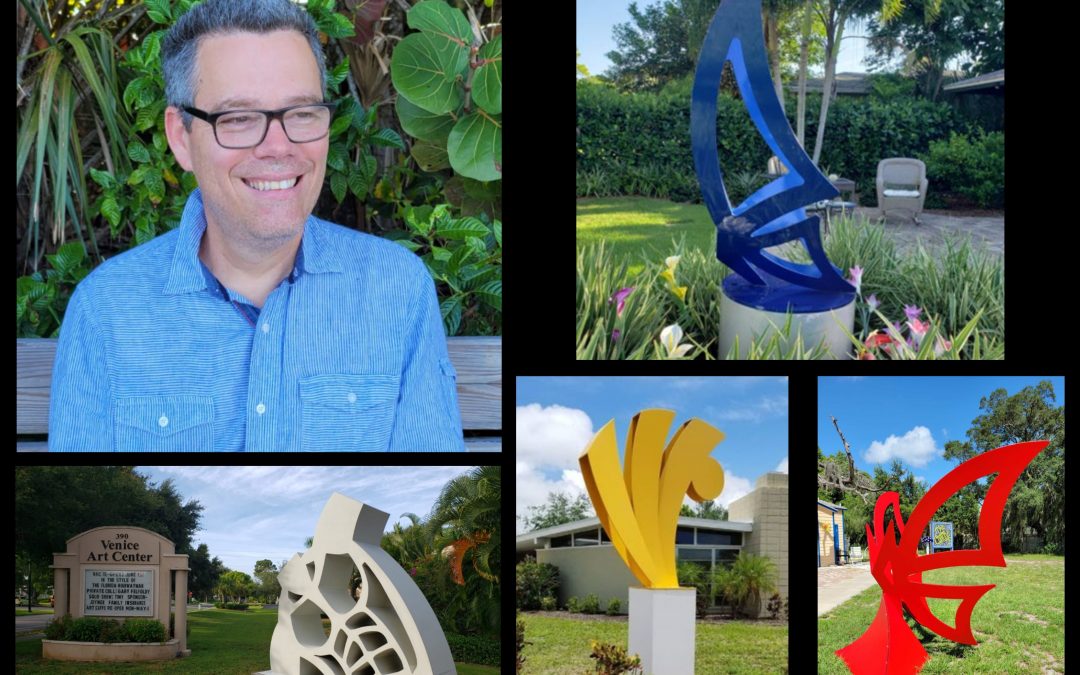 lugufelo is a renowned Sculptor who immigrated to the United States to escape the escalating political and social instability in his native country of Venezuela. His distinctive multidimensional style triggers many senses, creating an integrated experience that grows over the years, forcing the observer to continually reexamine their interpretation of what they see, observation after observation.

The ability of lugufelo’s work lies in his use and understanding of geometric shapes, which capitalizes on the tactile nature of his materials, whether they be aluminum, stainless steel, or wood, to the subtleties of shadows cast by his pieces as the sun hits the form at different times of the day.

He harnesses nature to further amplify the senses by capturing the whispering wind, gently passing through his art, or roaring across its surfaces to integrate further the experience beyond a colorful representation of his mind’s eye but into the total immersion of insight beyond the physical.

Although lugufelo studied under the watchful eye of one of the greatest geniuses for kinetic design, Jesus Rafael Soto, he is also influenced by Naum Gabo, Pablo Picasso, and Victor Vasarely. The uniqueness of his installations is that they can be scaled to mega proportions suitable for railings, roofs, gates, shade panels, and banners to corporate entrances or local parks, juxtaposing with the surrounding natural topography, capturing the reflective gazes of curious onlookers.

Lugufelo’s ability to fabricate designs at an exaggerated scale gives him the freedom to create art out of the most mundane components, bringing a new perspective to art and design. He often integrates computer-generated components that scale to work as a mega-sized integrated piece of art with his installations.

Even great sculptors need mental and physical health breaks, and lugufelo is no exception. He enjoys bicycling and walking to relax and calm his mind and often spends his free time practicing martial arts. lugufelo has been a member of the Florida Association of Public Art Professionals (FAPAP) since 2011. He is also the recipient of several awards, including the 2014 Appreciation and Achievement Award at the Hispanic Heritage Art Exhibit, 1st Place in the Sculpture Artists and Arts Juried Show in 2014, the Douglas County Art Encounters People’s Choice Award, “The Eye,” Castle Rock, CO in 2013. In 2013 he was honored with the official dedication of February 25, “lugufelo Day,” by the City of Doral, Florida.

lugufelo was born and raised in Venezuela but came to the United States in the 1990s and obtained citizenship in 2009. He currently lives in Venice, Florida, and his work can be viewed in private collections in America, Mexico, Norway, Spain, Panama, and Venezuela, in addition to public exhibitions worldwide.