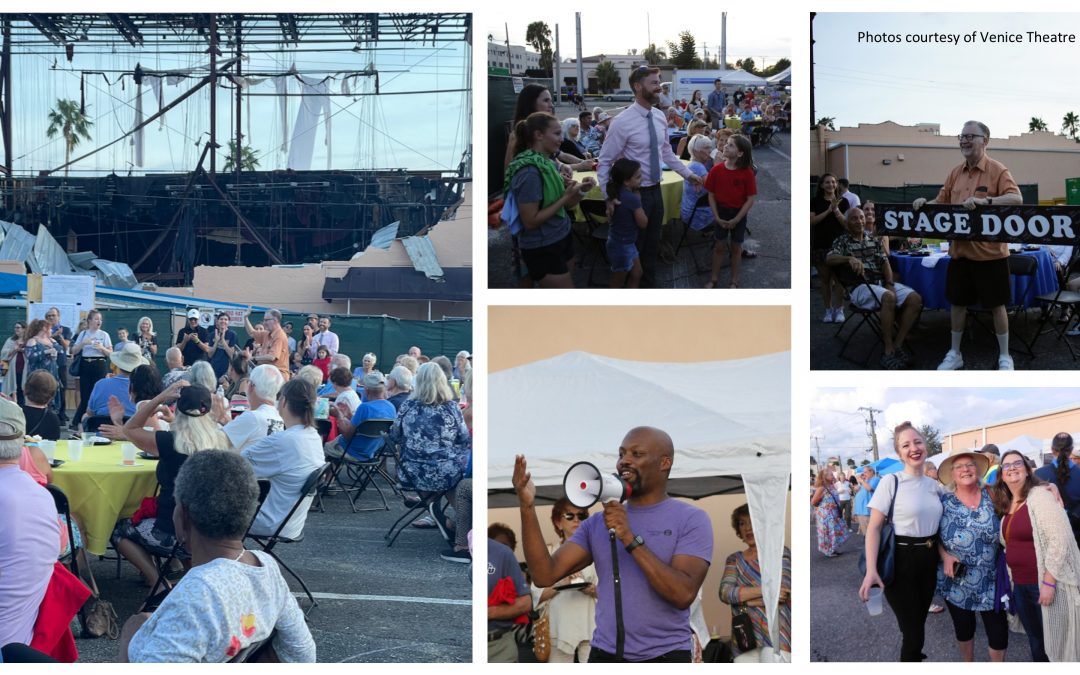 Venice Theatre’s annual volunteer appreciation party was not canceled due to Hurricane Ian. Instead, Venice Theatre staff members moved forward with a party in the parking lot, the damaged – but far from destroyed – 1926 theatre building serving as a dramatic backdrop.

Approximately 300 partygoers enjoyed food from Brew Burgers and relished the chance to see each other, view the state of their beloved theatre, and listen to plans about the theatre’s hurricane recovery efforts.

Executive Producing Director Murray Chase welcomed the crowd with a megaphone since no electricity was available on site. He then passed the horn to Board President Laura Kopple who told the volunteers, “You are what keeps us alive.”

Addressing the group after Kopple was General Manager and Director of Diversity Kristofer Geddie who thanked volunteers for all of their messages of concern and offers to help after the storm assuring them, “We will need lots of help!” He also explained that before volunteers could assist with cleanup and repairs, the employees from SERVPRO will need to finish their work to make the theatre safe for re-entry. SERVPRO’S large truck has been parked at the theatre since the company was called in days after the storm to assist with clean up and water mitigation. A team of about 40 workers is at the theatre daily.

Development Director Eric Watters made a lively speech about how donations of all sizes will be crucial to rebuild the main stage Jervey Theatre as well as keep the theatre in operation until that challenging job is completed. He singled out one fundraiser in particular, presenting an award to 13-year-old Delaney Lockwood for raising over $700 in three hours with her neighborhood lemonade stand. The Venice Theatre student actor has been involved with the theatre from a young age, performing with Watters in A Christmas Carol and in many other shows. Lockwood said in a social media post, “All money will be donated to Venice Theatre to help with rebuilding after Hurricane Ian. This is where I was introduced to and fell in love with theatre. This theatre and the people here have given me valuable experiences and opportunities and supported me in so many ways. This is just one little way that I can try to show some support back.” Watters challenged the rest of the volunteers to step up to give and raise money in their own ways. Although the theatre is well-insured, millions must be raised to cover what the insurance policies cannot.

Chase took back the megaphone to acknowledge Deputy City Manager James Clinch who was there as a representative of the City of Venice, but also as a volunteer actor and father of student actors Eli and Cora Clinch. Also on hand were Gulf Coast Community Foundation President and CEO Mark Pritchett, City of Venice Vice-mayor Nick Pachota, and John Bryant from Sweet Sparkman Architecture and Interiors. The company has been working with Venice Theatre for the past three years on renovations to its main building, Technical Arts Center, and Arts Education Center. Bryant spoke to the challenges of rebuilding the Jervey Theatre, assuring everyone that the job was possible and highlighting it as an opportunity to rebuild the space better, bigger, and stronger.

Until the Jervey Theatre is repaired, Venice Theatre’s team is working on a plan to use its other spaces on campus for presenting shows. Its Arts Education Center will be re-purposed into a 128-seat “thrust” theatre which should be ready in November. The 90-seat Pinkerton Theatre on the west side of the main building is expected be ready for use in January 2023 once all water is removed and electricity is restored.

The theatre will announce a revised 2022-2023 schedule in the coming days. Community members interested in donating to the theatre’s hurricane recovery may do so at www.venicetheatre.org/donate.

About Venice Theatre
Venice Theatre is a 501(c)(3) organization dedicated to making a dramatic impact on all stages of life. The second-largest of 10,000 community theatres in the United States, it is located at 140 Tampa Ave. W. in Venice, FL. In addition to providing entertainment to the community, Venice Theatre offers a wide range of education and community engagement programs for children, teens, and adults.