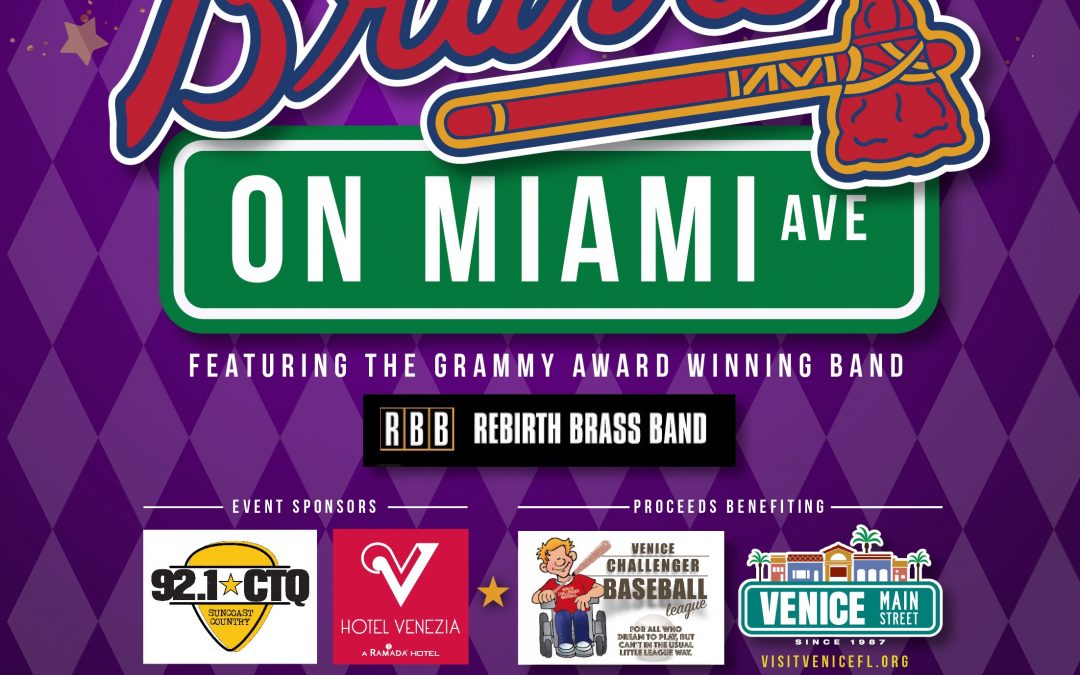 Dust off your baseball caps and join the block party on Miami Avenue in downtown Venice on Saturday, February 8, 2020 from 5 to 10 p.m. to kick off the beginning of spring training in Mardi Gras style. Hosted by Venice MainStreet in partnership with the Atlanta Braves Spring Training Organization, the evening will be filled with fun activities for the whole family.

Enjoy kids activities, a 50/50 raffle, food trucks from The Maine Menu, Shaky Dogs, Dirty Dogs Mini Donuts, Kona Ice and Budweiser beer. Mardi Gras merchandise will be available for purchase, so get those beads! The Grammy award winning Rebirth Brass Band, a New Orleans institution, will transport attendees to the streets of the French Quarter, with its combination of traditional instrumentation with funk, hip-hop, soul, and other modern elements. The band takes the stage at 6pm and its high energy will be sure to have everyone dancing in the streets. Mike Burnett and the Suns of Circumstance perform at 8pm.

Andruw Jones was signed by the Braves as an amateur free agent in 1993, Jones spent 14 years in the Atlanta organization, including 12 at the major league level. Jones spent time with five different Major League organizations and played two years with the Rakuten Golden Eagles of the Japan Pacific League during his 21-year playing career (1994-2014.) A career .254 hitter in the majors, he totaled 434 home runs and 1,289 RBI in 2,196 games. He hit a franchise-record 51 home runs in 2005. Now Andruw is a special assistant to baseball operations, instructing and assisting minor-league outfielders during regular and spring seasons, and assists with major league workouts during the spring.

Michael Dunn, Vice President of Florida Operations for the Atlanta Braves, shared, “We are thrilled to be invited by Venice MainStreet to help celebrate the start of Atlanta Braves Spring Training. Atlanta Brave legend Andruw Jones and others will be on hand to help kick off the season!”

Proceeds from this event go to two local nonprofit organizations: Venice Challenger Baseball and Venice MainStreet. Admission is $5 and kids under 12 are free. Parking is within comfortable walking distance. Don’t miss out on this wonderful community event. For more information, go to visitvenicefl.org or contact Venice MainStreet at 941-484-6722.
Purchase tickets: HERE