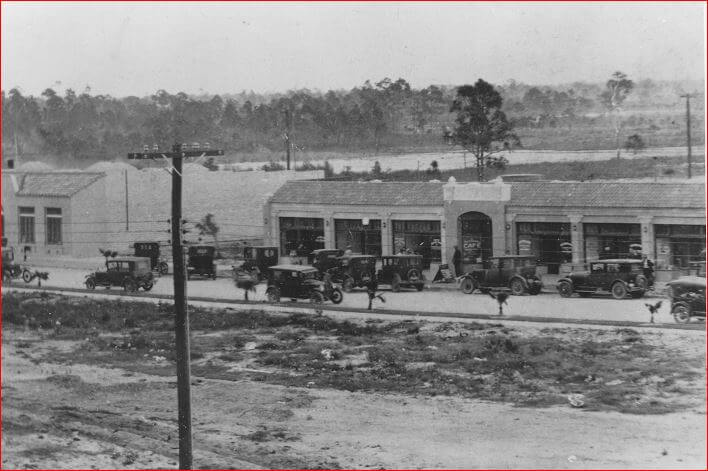 It was designed by architect Harrison Gill and built by Carey & Walters of Plant City. It was described as a “Spanish design” with stucco-covered hollow clay tile walls. The exterior façade has not been altered since it was constructed. According to newspaper ads, it was originally the home of Venetian Dry Cleaners. Business must have been good, because by May 1927 the owner Pat Gudger was installing new cleaning and pressing equipment.

This building was completed in January 1927 for an estimated cost of $125,000. It was owned by Stanton Ennes, the general manager of the Brotherhood of Locomotive Engineers (BLE) Realty Corporation.

It was constructed of stucco-covered clay hollow tile and brick by the George E. Fuller Construction Company. Rather than the usual red clay barrel tile roof, this building had a green, concrete, shallow s-tile roof manufactured by the Venice Tile Company located in the Industrial Section of the city east of the railroad tracks.

The building was designed as two two-story wings connected on the first floor by a roofed, open-ended, sky-lighted roof that formed an arcade.  The second floor originally housed the Hotel Valencia. An uncovered walkway encircled both wings providing access to each hotel room. The hotel lobby was on the first floor facing the arcade. As was typical of the 1920s, the hotel rooms were small and the adjoining east and west facing rooms in each wing shared a bath (toilet and shower) with a sink in each room.

Seven stores, besides the hotel lobby and the post office, were located on the first floor with some opening directly onto the arcade. By July 1927, a newsstand and an office of Florida Power and Light Company (FPL) were also located in the building. The ventilated box-like structures on the roof were part of the original solar water heating system.

The first floor arcade has been closed and a roof now covers the area between the second floor wings creating a common area for the residents who occupy the original hotel rooms.