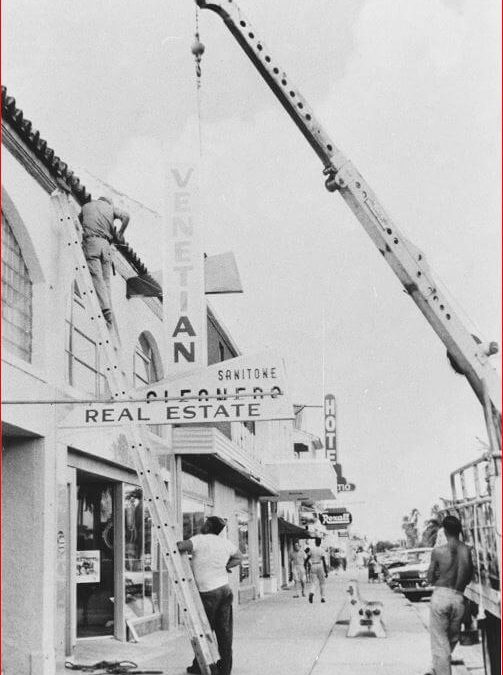 Originally constructed as a two-story building occupying three lots, it has been divided in half with each side assigned a different parcel-id by the Sarasota County Property Appraiser. Alterations to the street façade have obscured the architectural details (windows and doors) of the original structure. Aerial photos from the 1920s and sidewalk photos from the 1950s show large, two-story arched windows across the front of the building.

The building was originally the location of the Shaw Dry Goods store and is, therefore, sometimes referred to as the Shaw Building. Before the construction of St. Mark’s Episcopal Church in 1939, the building housed the Episcopal mission. It has been used as a library, site of Venetian Cleaners, and a hardware store.

The eastern half of the building (213 West Venice Avenue) was renovated in the fall of 1990 according to the design guidelines established by the city’s Architectural Review Board (ARB). The ceramic tile under the store front windows, earth tone roof tiles, and stucco relief details were required by the ARB to replicate key elements of the city’s original architectural style. The western half of the building (217 West Venice Avenue) was also renovated according to ARB guidelines. The most notable addition was the canopy over the city sidewalk.

The shed tile roof on the street façade is the only original architectural feature of the original building that has survived.